He is not heavy he’s my brother

The Illusion of peace in the Middle East

Supporters of the new-old idea of “regional peace” ignore the hostility and mutual suspicion between the Palestinians and their Arab brethren. Abu-Mazin and his group prefer to see the European countries alongside them, in the hope that they will impose on Israel a “solution”

In general, Palestinians trust Western countries more than their Arab brethren. This is why the Palestinian Authority, headed by Abu Mazin, continues to insist on an international conference as the preferred method for achieving peace in the region, rather than a “regional approach” that will give the Arab states a central role in resolving the conflict. Arab involvement in the peace process with Israel is in fact the last thing Abu Mazen and the Palestinians are interested in.

Oppose normalization with Israel
Israel as a Jewish state is anathema to Palestinian aspirations. No Arab leader in the world can persuade the Palestinians to give up the right of return or to accept a solution that allows Israel to retain control over certain parts of the West Bank and East Jerusalem. Every Arab or Palestinian leader who promotes such a compromise will take his own life, and Palestinian history will remember him as a “traitor” who sold his soul to the Jews and succumbed to American and Israeli pressures.

PA Foreign Minister Riad al-Maliki said this week that the Palestinians rejected the idea of ​​a “regional solution” that would give the Arabs a role in the peace process. According to him, Netanyahu erred in thinking that the rapprochement between Israel and some of the Arab states would produce some positive result. Al-Malki condemned the Israeli Prime Minister’s “regional approach” as “a distorted policy,” adding: “Netanyahu believes he can force the Palestinians to enter into negotiations by forging ties with Arab governments.” According to him, the Palestinians want to see alongside them when they negotiate with Israel the Europeans, not the Arab states.

The Palestinian foreign minister says that when it comes to an attempt to gradually destroy Israel, the Palestinians prefer to see the Europeans and not their Arab brethren in their lot. It seems to the Palestinians that this is a safer bet.

One way or another, any “regional solution” involving Arab states is doomed to failure, as the Palestinians and their Arab brothers hate each other. Moreover, even if Abu Mazen had agreed to the terms such an alliance would have dictated to him, his people would have rejected them. Any solution proposed by the Arab governments will always be considered an ‘American-Zionist dictum’.

Here is what the Palestinians really want: to use the Europeans to impose a ‘solution’ on Israel. This is why Abu-Mazen sticks to the idea of an international conference like a dog clinging to its essence in a frenzied way.

Fifty years since the liberation of Jerusalem

Jerusalem – a city that does all of Israel to its members.
“From the historical catastrophe that the Roman king Titus destroyed Jerusalem and exiled Israel from his land, I was born in one of the city of Israel, but at any time I always resembled myself as born in Jerusalem”

They are testimony to the emotional connection, yearning and yearning that Jews throughout the world have felt for Jerusalem – the beating heart of the Jewish people.
Jerusalem is the object of the prayer of every Jew who prays every day “and to Jerusalem your city with mercy will return.” Is a physical place, but to a large extent a metaphysical place – a point of contact between the heavenly Jerusalem and the earthly Jerusalem, between sacred and profane, between peoples and religions, between past, present and future.

We observe with joy and gratitude the good fulfillment of the prophetic vision. In his prophecy, the prophet Isaiah described the idealized reality of the city of Jerusalem: “And I will restore you as your firstborn, and your trees as an after growth: then the city of justice shall call you a faithful town Zion shall be redeemed in judgment, and her captives in righteousness” (Isaiah 1: 26-27). Jerusalem can not be repaired and redeemed unless it is justly and justly.
We have been privileged to live in a generation that sees the building of the eternal capital, its development and growth, and wishes to see the continued flourishing of the City of Justice, a loyal town, out of the unity of Israel and charity.

Many and varied are the significant figures in the Israeli public sphere that grew out of the human fabric of Jerusalem, sucked from its spiritual treasures and were influenced by the cave. It seems that they carry Jerusalem wherever they go. 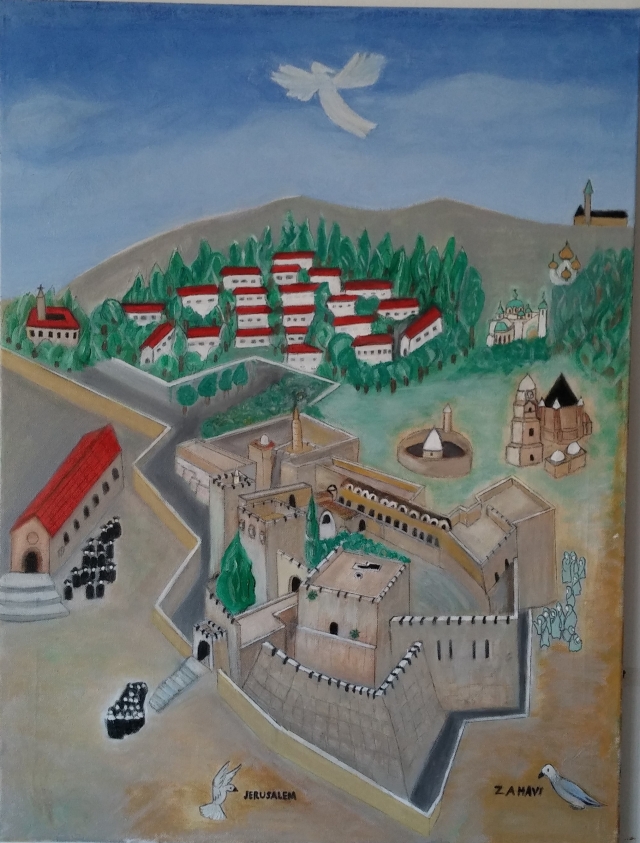 A painting of me looking from the Old City to the Yemin Moshe neighborhood. Oil on canvas END_OF_DOCUMENT_TOKEN_TO_BE_REPLACED

It can make you happy, upset, make you move, and even aid in the treatment of heart problems and hypertension. Many studies have shown that listening to music directly affects many areas of the brain, as well as daily functioning. All the reasons increase the volume.

The power of music over thoughts and emotions is enormous: it can make a scene in the film exciting or stressful, make you shed a tear and remember your love and smile on your lips. How do characters and musical instruments affect us so dramatically?

Many studies from recent years have shown that music has a direct effect on the brain. Here are some fascinating findings that will make you appreciate even more every sound:

Happiness
It’s no secret that a good song can “bounce” the mood, sometimes significantly. Science proves this: A study published last year showed that participants who were exposed to 12 minutes of joyful music reported an improvement in mood.

Another study showed that subjects who were asked to make an effort to become happier did so more successfully while listening to music than those who were not exposed to music and were asked to do the same task. The researchers conclude that listening to “positive” music is an effective way to improve the joy of life.

My paintings, my musicians. Oil on canvas 80X60 cm 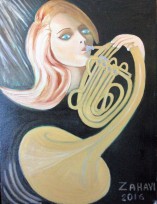 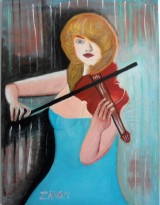